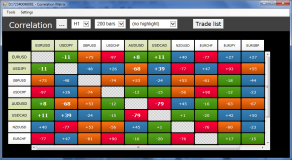 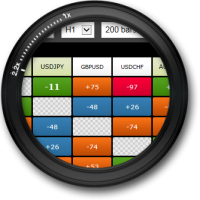 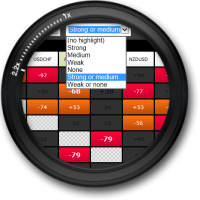 The grid is displayed not only as numeric values (ranging from -100 to +100), but also using simple colour-coding which helps traders to identify strong or weak correlation at a glance. Strong correlation is marked in red because traders will typically want to avoid it - or, at least, tread carefully when dealing with open positions in two symbols which are strongly correlated against each other.

The trader can change the basis of the calculation, selecting a timeframe such as M15 and a number of historic bars, based on the most appropriate time period for the length of trade which they are expecting.

The app lets the trader highlight sub-sections of the grid, e.g. isolating symbols which are strongly or weakly correlated against each other.

The app can calculate an average correlation between all the symbols in which the trader currently has an open position. The app also lets the trader select any basket of symbols and then calculates the average of the current correlations between them. This enables the trader to assess the internal risk of a prospective portfolio of trades which they are currently considering.

Correlation can have a major effect on trading risk. For example, if EUR/USD and USD/CHF have been strongly correlated, then a trader who had open positions in both would have seen very similar profits on each position. In effect, the trader did not have two positions; they only really had one position. (They will either have seen similar profits or losses on each position, or they will have seen matching profits and losses which largely cancelled each other out.)

It is generally advisable for a trader to minimise the correlation between their open positions. Otherwise, they are either trading the same price action twice over, or they have two positions which largely cancel each other out.

FX Blue Labs can provide videos about each app. Broker clients can either use generic un-branded videos, like this example, or can commission branded versions which FX Blue Labs will arrange and pass on at-cost from the video company.