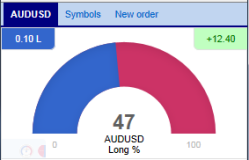 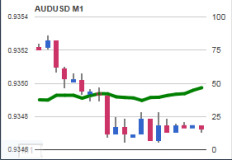 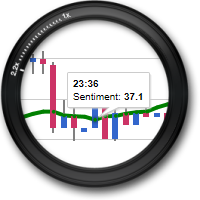 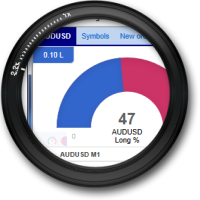 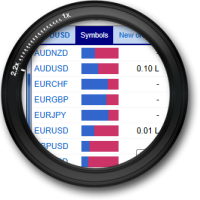 The Sentiment Trader is based on live sentiment data from www.fxblue.com (part of the FX Blue group), and enables traders to take real-time market sentiment into account in their trading decisions. Key features include:

Traders can use the sentiment information as confirmation of trading decisions, or as fail-safe (e.g. don't take a short trade if sentiment is above 80%).

Further options in the Sentiment Trader app include the following:

The sentiment data is based on real-money accounts publishing their results to www.fxblue.com (though this can be replaced with a broker's own feed if they are able to provide it, and have sufficient active traders to produce meaningful percentages).

The list of available symbols is determined by popularity, i.e. the number of people trading them. For example, sentiment data is not available for CAD/JPY because there are typically too few traders with an open position to calculate a meaningful percentage.

If a trader has multiple open orders in the same symbol, then the sentiment calculation uses a single net figure for the trader's positions. For example, if a trader has an open buy order for 1.5 lots and an open sell order for 0.7 lots, then they are treated as being long. The sentiment percentage is not weighted by volume (because www.fxblue.com has a few users with very large accounts and trade sizes). A trader who is long 0.1 lots has the same effect on the figures as a trader who is long 50 lots.

FX Blue Labs can provide videos about each app. Broker clients can either use generic un-branded videos, like this example, or can commission branded versions which FX Blue Labs will arrange and pass on at-cost from the video company.